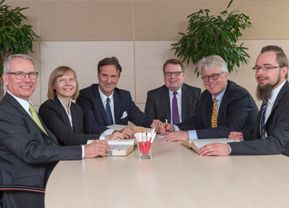 LKC group with headquarter in Munich-Gruenwald will take shares in WW+KN Wagner Winkler & Collegen GmbH in Regensburg on July 1st, 2015. The share-transfer is a result of the succession plan for retiring managing partner and shareholder Gerhard Wagner. But also in the future, a substantial part of the shares will be owned by the local WW+KN management around managing partner Matthias Winkler and the managers Marcel Radke and Kerstin Winkler.The WW+KN Krinninger Neubert PartG with offices in Ottobrunn and Munich will be absolutely independent and is in no relationship with the LKC group. The cooperation between WW+KN Wagner Winkler & Collegen GmbH and WW+KN Krinninger Neubert PartG will be continued without any changes.

WW+KN Wagner Winkler & Collegen GmbH employs approximately 30 people staff and is focused on consulting foreign companies with business affairs in Germany. As a member of the LKC group WW+KN will be also independent and autonomous in the future. For clients and employees there will be no changes. “With this solution we can continue our long-term work on the same quality level. Working with LKC group is a good perspective for our clients and also for our employees”, Gerhard Wagner said. “The succession plan was also a big challenge for us. With the participation of LKC in WW+KN we secured our office for a long time and are looking forward working together with the other LKC colleagues”, WW+KN managing partner Matthias Winkler added.

LKC group has 13 offices and employs more than 300 people staff in Germany. In 2014 the group, pooling auditors, lawyers and tax advisors, generated more than 30 million euro turnover and belongs to the 25 biggest auditing companies in Germany. Within the LKC group WW+KN Wagner Winkler & Collegen GmbH will represent the 14th office. WW+KN Wagner Winkler & Collegen GmbH will also doing business under its current name and only add to its company name “a member of LKC group”. As written above, WW+KN Krinninger Neubert PartG is not affected from these developments and stands in no relationship with the LKC group.